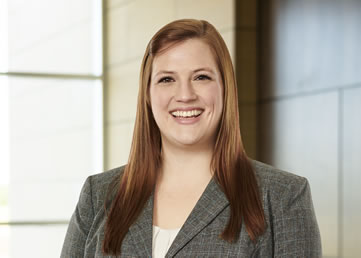 Carrie grew up in Mound, Minnesota and remains connected to the community. Carrie values relationships and getting to know every individual as a unique person. Carrie is guided by a fundamental drive for justice, and she is dedicated to achieving the best outcome possible for each of her clients.

Carrie attended Concordia College in Moorhead, Minnesota, where she earned her bachelor’s degree magna cum laude in political science and print journalism. She also formally studied music and was heavily involved in the music program, including national and international tours with The Concordia Choir as well as performance in Vocal Jazz and the Emmy Award-winning Concordia Christmas Concerts. While in The Concordia Choir, Carrie recorded with the Grammy Award-winning British ensemble The King’s Singers. Carrie’s involvement in non-music activities included writing for and serving as the managing copy editor of The Concordian (weekly newspaper) and The Afterwork (annual art/literary journal). Carrie also had a summer opportunity to work as an intern at a non-profit organization near Washington, D.C.; she worked to educate lawmakers and to connect vulnerable young mothers to resources, particularly pregnant and parenting college students.

Ms. Loch is admitted to practice in the United States District Court of Minnesota and Minnesota state courts. She is a member of Minnesota Association of Justice and formerly served as co-president of the Women for Justice section of that organization. Carrie has been published in Minnesota Trial magazine. She focuses her practice on personal injury and long-term disability cases.

When she isn’t working, Carrie enjoys spending time with her two children and local family, making music with friends from church, and cuddling with her cats.