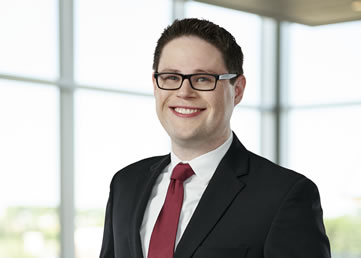 Eric Schwab grew up in Albert Lea, Minnesota. He obtained his bachelor’s degree from the University of Minnesota graduating with majors of Entrepreneurial Management and Marketing. After graduating, Eric began working in retail management. This is where Eric was first introduced to the workers’ compensation system through his own work injury. Through this injury he learned how challenging the workers’ compensation system can be to navigate alone.

Once he recovered from his work injury Eric began working as an adjuster for the largest administrator of disability and workers’ compensation benefits in the country. In this role, Eric learned all the strategies and tactics insurance companies use to dispute claims. This means he knows how the insurance company and its attorneys will look at the case and knows how they will fight against an injured person.

Eric brings his years of experience as an injured worker, adjuster, and defense attorney to help injured individuals. He is excited to be able to benefit real people rather than insurance companies and big business.

Eric is admitted to practice in the Minnesota State Courts and the United States District Court for the District of Minnesota.

Eric lives in Inver Grove with his wife and two small children. Outside of work, Eric enjoys spending time with his family and watching Minnesota sports teams, particularly the Minnesota Vikings. Eric can often be found rooting hard for the Vikings, no matter their record.