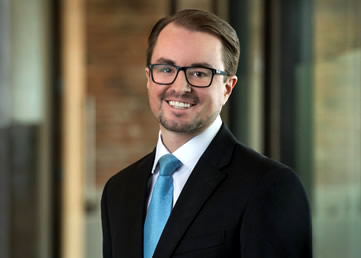 Blake Bauer started his legal career while still in law school as the Judicial Law Clerk for Judge Joanne Smith in Ramsey County Minnesota. While working as a law clerk, Blake handled thousands of cases and several jury trials, providing him with courtroom and trial skills. After several years of working for the government, Blake joined Marso and Michelson, P.A. and quickly became the managing partner of the firm.

At Marso and Michelson, Blake represented consumers who had trouble paying their bills, typically their medical and credit card debts. He defended hundreds of state court lawsuits for consumers and brought Fair Debt Collection Practices Act (FDCPA) and Fair Credit Reporting Act (FCRA) claims on behalf of clients in Federal Court against harassing third-party debt collectors. Blake has always enjoyed practicing law in this area because he can make a real difference in his clients’ lives, and helps them in their time of need.

In 2017 Blake joined Fields Law Firm, bringing the Marso and Michaelson Consumer Law clients with him. This move was a perfect fit because the two firms focus on areas of law that are dedicated to helping people in need. In fact, Blake has dedicated his entire career to helping individuals who are dealing with life’s unanticipated circumstances. Blake understands and appreciates the struggles people experience when they are are unable to work, and knows how crippling it can be emotionally, financially, and physically to not be able to support your family.

In his free time, Blake enjoys spending time with his wife and two young boys, fishing, playing golf, going to the Minnesota’s Brainerd Lakes Area and spoiling his nieces and nephew.